*** I was provided with an all expense paid trip for this event. All though all opinions are 100% mine****

Have you ever had one of those Pinch me I must be dreaming moments? Well this is mine! I was invited to LA where I will be attending the #AvengersEvent Thursday, April 9th – Saturday, April 11th. 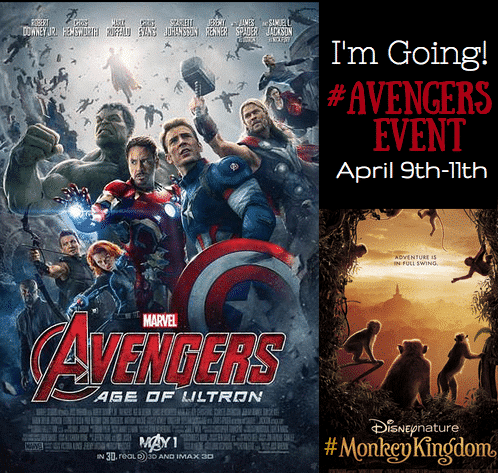 I received the news a few days ago I still feel like it is too good to be true! I will be attending the screening of  Marvel’s AVENGERS: AGE OF ULTRON (opening in theatres on 5/1)!

Who has always wanted to meet a super hero? Me!  I will also be attending a press junket where I will be able to actually interview (SUPER HEROES!)Some of the cast from Avengers:Age of Ultron.

I will be asking my fans for questions to ask the stars!

Marvel’s AVENGERS: AGE OF ULTRON will hit theaters everywhere on May 1st!

As If meeting super heroes is not cool enough, I will also be previewing Disneynature’s MONKEY KINGDOM (opening in theatres on 4/17) on the Walt Disney Studios lot!!   Followed by a trip to LA ZOO monkey exibit!

Life is an adventure for Maya, the clever and resourceful blonde-bobbed monkey in “Monkey Kingdom,” Disneynature’s new feature film set among ancient ruins in the storied jungles of South Asia. Maya’s world is forever changed when she welcomes her son, Kip, into her complicated extended family. Like all families, Maya’s has more than its share of colorful personalities—and she’s determined to give her son a leg up in the world. When their longtime home at Castle Rock is taken over by powerful neighboring monkeys, Maya’s whole family is forced to relocate, and she uses her street smarts and ingenuity to lead them to untapped resources amidst strange new creatures and unsettling surroundings. Ultimately, they will all have to work together to reclaim Castle Rock, where Maya can hopefully realize her dreams for her son’s future.

I can not wait to share my adventures with my fans. I will be tweeting and posting on facebook while at the event. What questions would you ask the stars from Avengers?

I'm really looking forward to meeting you on this trip. It's going to be fun!

A brand new Marvel’s AVENGERS: AGE OF ULTRON TV spot debuted during March Madness and an extended version is now available - Adventures of a Nurse