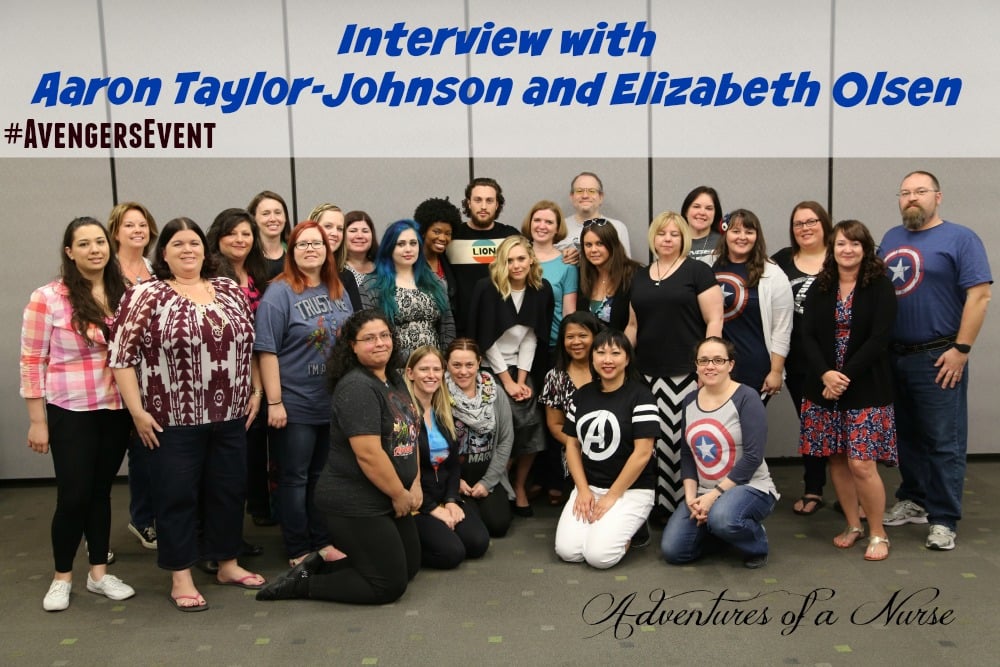 So I bet everyone is wondering what it is like to be in the same room with Comic Book Heroes? As a part of the #AvengersEvent we were able to interview several of the cast of Avengers Age of Ultron.  Quicksilver and Scarlett Witch joined the cast of Avengers in Avengers: age of Ultron. Aaron Taylor-Johnson (QuickSilver) and Elizabeth Olsen (Scarlett Witch) plays twins. Twins and super heroes how cool is that?

I could not wait to give my fans a inside look at what it was like to interview SUPER HEROES. Here is a few questions we were able to ask. No spoilers of course. You will have to wait to see the movie on MAY 1. 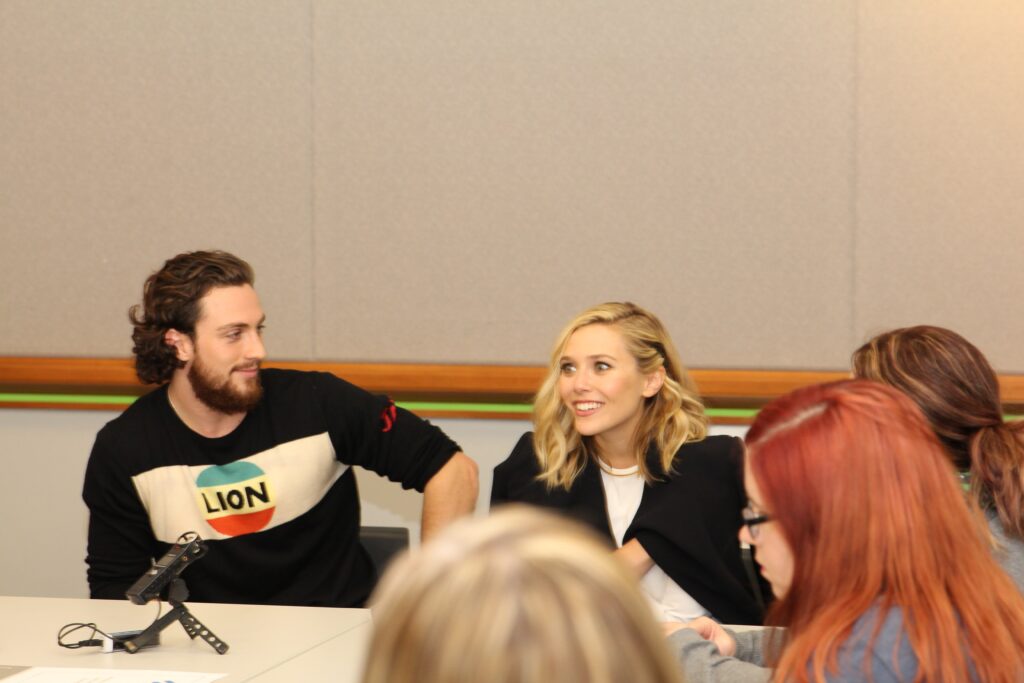 Q : So with this being your guy’s first Marvel film can you tell us about the audition process and where you were when you found out you had the role?

OLSEN     :    We, we actually didn’t have an audition process. It was we both met with Joss separately. You met with him before I did I think and we were about to Godzilla when we both met. I don’t remember when I met with him but I met with him at some point. You met with him before. We finished filming Godzilla and then we both that summer got a phone call that was like you guys got the parts and we’re like whoa, okay and that was kind of it. It was really crazy and exciting and Aaron and I were really excited that we got to work with each other again more so because in Godzilla we, if you’d seen it we didn’t really get to work with each other as much, yeah.

JOHNSON   :    Yeah, I mean ‘cause stepping onto the set seemed kind of, you know, it was such a big ensemble. It felt kind of daunting, you know, to step on with Lizzy who we already had that kind of work relationship which made it feel a lot more comfortable. 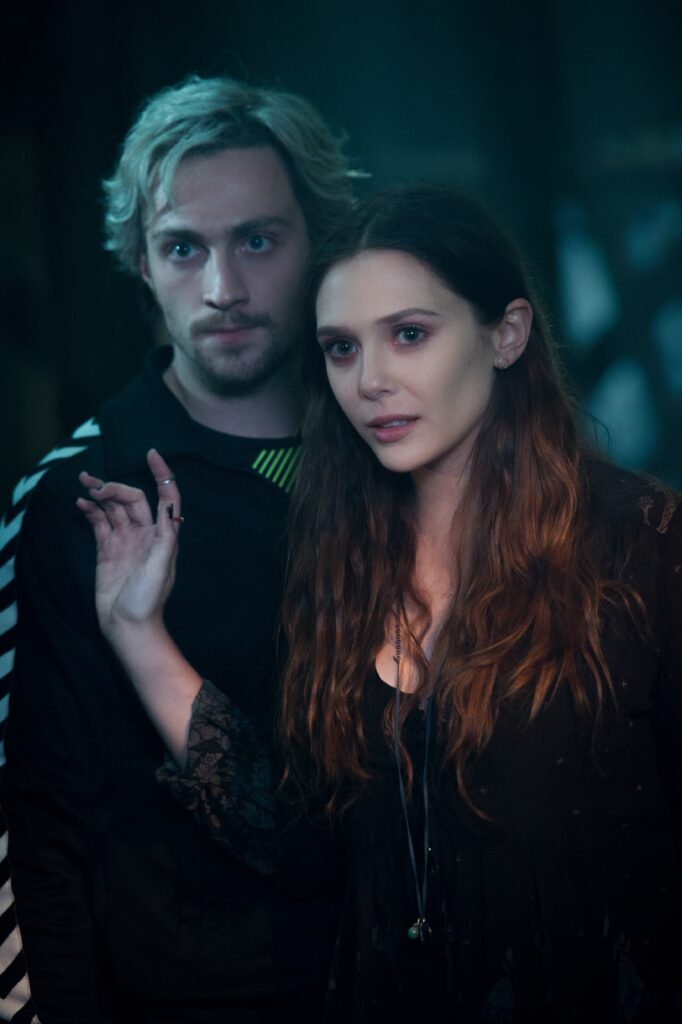 OLSEN     :    Well, I’m a fan of Marvel already and then Scarlet Witch so basically I don’t know — I didn’t know who she was before hand and the Joss was telling me about her and then we both asked for a lot of research on our characters and they gave us every, every comic book page that both of our characters have ever been on basically and it was this huge stack. And I think she’s one of the coolest characters in the entire universe of Marvel I think largely because of the House of M series because she’s this, she’s the most powerful person in the entire universe, X Men and Avengers combined. I think she’s really nuts too and  I mean I just find her to be really …

JOHNSON   :    I guess, you know, I was really excited about, you know, obviously they have really cool super powers but I was really, uh, really wanted to explore who the character was behind Quick Silver and Pietro was kind of our main goal and Wanda as well to kind of bring it back to the origins and it was based in someplace in like Eastern Europe to we wanted to embrace that kind of accent and I really wanted to have this same kind of look from the comic books and yeah just kind of, king of together as well.

I mean Quicksilver, you know,  he needed Scarlet Witch because they’re very much, you know, they balance off each other. They’re twins and they’re very much ying and yang in the way their personalities are. He might be quick, you know, in speed so he’s kind of quick in temperament I think, you know, in a kind of way and hotheaded and impatient and all those things I wanted to kind of play around with and especially balancing against her kind of more thoughtful, slower, more emotional sort of nurturing side with him, so and always drawn really close together connected.

So it kind of, it kind of gave us a sense of like insecurity when they went with each other or kind of vulnerability. All they had was each other. So we kind of played around with everything that we could, you know, visually see, what we could read and that was kind of fun. And Marvel really opened to suggestions and ideas and wanted to, you know, do those characters justice so it felt very collaborative very early on. 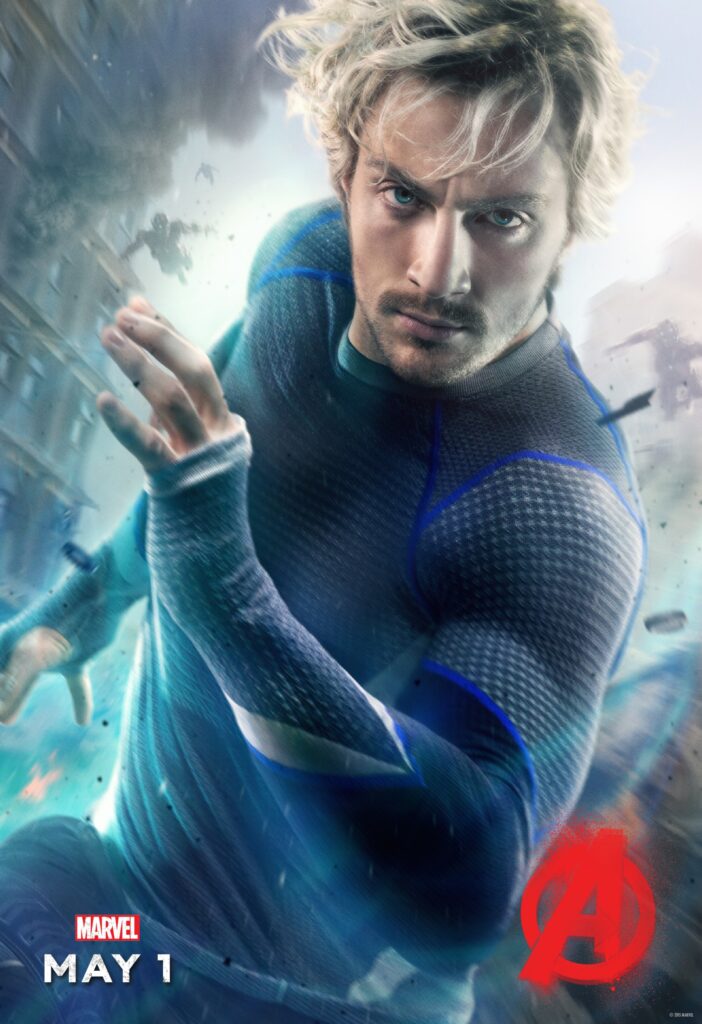 JOHNSON   :    Yeah. That was pretty much what I did all day long. You know, it was like if in doubt, run. Yeah, all the special effects is sped up.We’d shoot the scene like if Lizzy was in the scene I’d run up to her. We’d shoot that. We did the dialogue and then we’d have to do a plate afterwards where she’d step out and I’d do the run up and then they would speed that up. It’s like a plate shot. But yeah, even though you wouldn’t really know because it goes so quick. But yeah, all the running where there’s a blur it was me behind it. 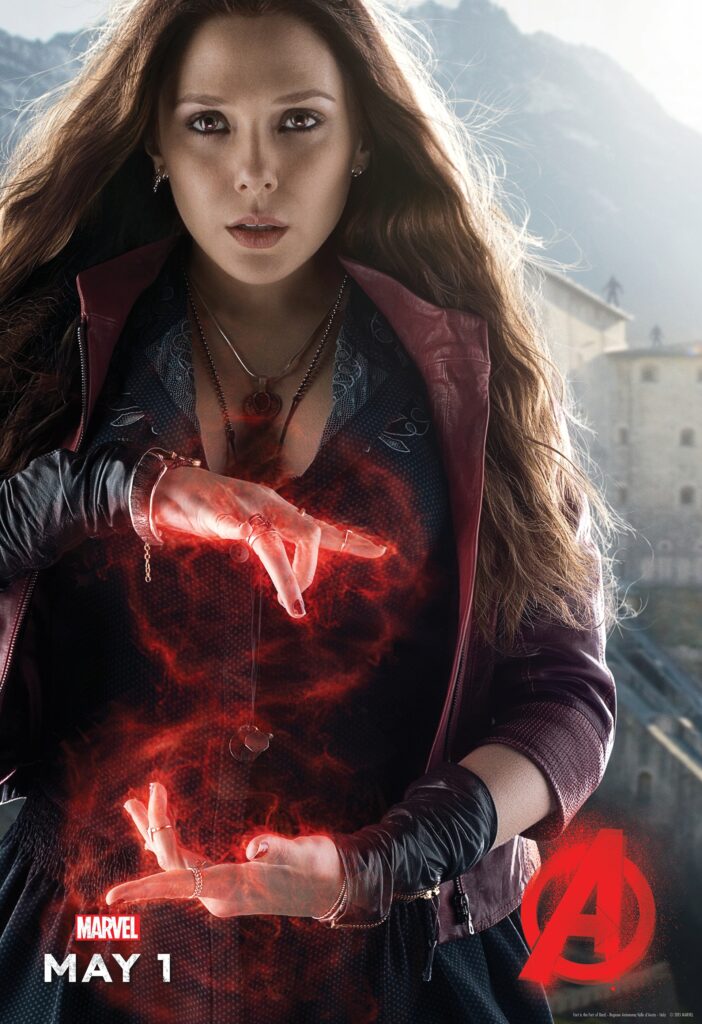 Q    :    Since basically all of your powers are special effects how was it for you to act out those parts where you’re just kind of staring?

OLSEN     :    Well, you know what it’s actually really fun because a lot of people have stunt doubles and my stuff is like a dance kind of and so I can’t have like a stunt double come in and do that. so I was like always doing everything whereas, you know, I even had to do like a triple flip back kick situation but I always got to be in control over my, my characters body movements which was cool and, and it was fun because there’s no blueprint to how Scarlet Witch moves ‘cause you just see these like awesome finger, hand gestures and these circular red things.

I worked with a movement coach and she and I watched Joss’s version of Scarlet Witch and that was really enjoyable to watch ‘cause he would do the motions and we would interpret it into our own thing but it was really fun. It was really fun to work with the dancer on something like that and it adds a different element to the fighting, a different visual element to the fighting.  And it also felt, you know, a little funny because you’re like I’m not making contact with anything, like literally zero contact. So, you just kind of trust that you’re gonna put a robot where my eyes or something, you know. Yeah. There’s a lot of trust that goes in when you have special effects that I wasn’t used to and then after seeing the movie I was like aha, now I’m comfortable. 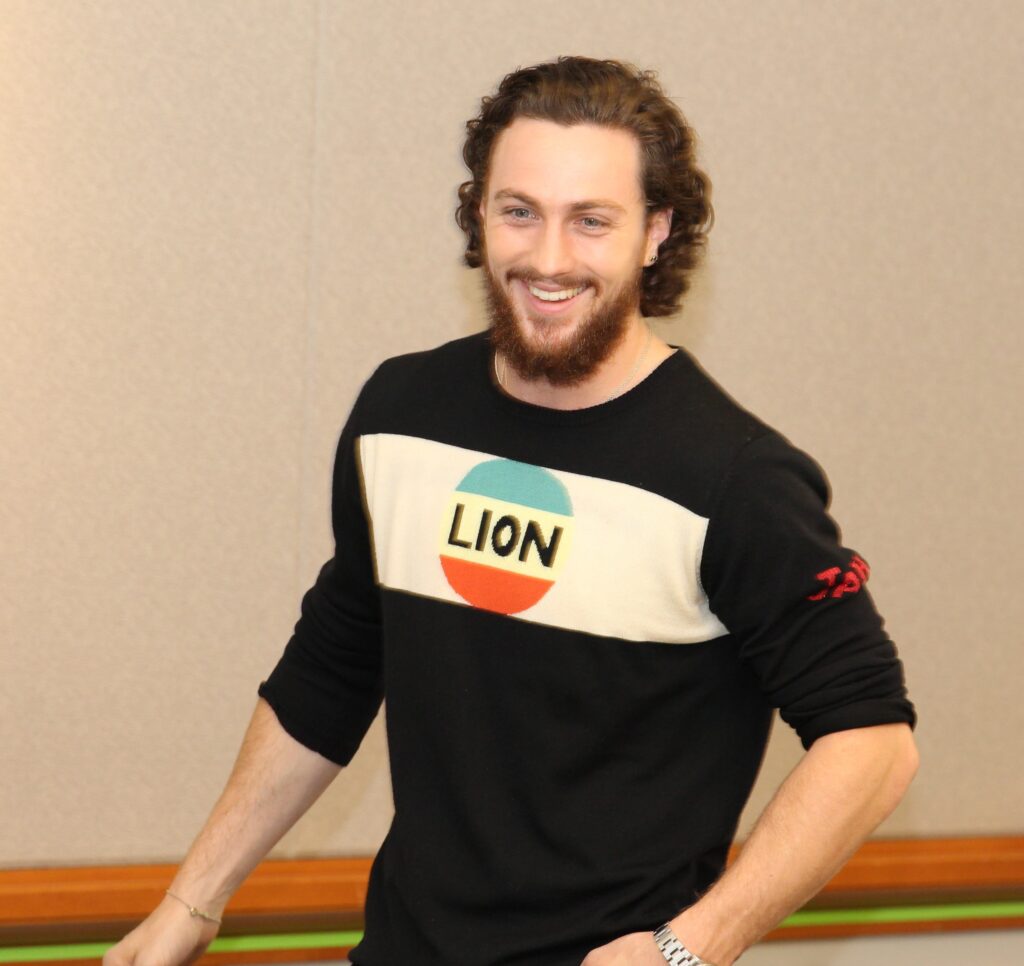 Q    :    You said that when you came onto the set with you guys working together before that made it easy but what was it like coming out to the set with the established?

JOHNSON   :    Yeah, that was kind of the initial thing of like oh, god everybody knows, you know, this is like their fourth or fifth movie playing these characters. They’re pretty comfortable in that kind of situation and with each other and just understand the whole kind of the mechanics of it ‘cause, you know, this movie is such a machine, you know. It just keeps going and going and you know, you’re a small piece to the rubric’s cube and they said that you just have to trust with these guys but you’ve seen the quality of movies they’ve done before so, you know, you can have trust but it’s just you don’t quite understand.

It feels slightly daunting It sort of very quickly becomes like a very kind of family environment, you know, they’ve set up over the years, you know, and very comfortable with one another so it feels — I mean you’ve met — you’ll be meeting them all over, relaxed and chill and the way they are here is the way they were on set. It’s just they just, uh, it’s just a lot of fun and once you have a laugh with that then you know it’s kind of cool and you can kind of think about what you’re doing rather than kind of observing like wow, this is pretty fucking cool and overwhelming and surreal. It’s kind of crazy but yeah, it was good.

Want to hear more about the Twins? Avengers Age of Ultron opens MAY 1 EVERYWHERE!

When Tony Stark jumpstarts a dormant peacekeeping program, things go awry and Earth’s Mightiest Heroes, including Iron Man, Captain America, Thor, The Incredible Hulk, Black Widow and Hawkeye, are put to the ultimate test as they battle to save the planet from destruction at the hands of the villainous Ultron.

Cool interview, I cannot wait to see what's next with their Characters. You did an amazing job!