I feel like this was all just a dream, it all happened so fast. My trip to LA was loaded with so many memories. I think this was one of my favorite. After previewing Avengers Age of Ultron, 24  bloggers  and myself had the chance to interview some of the cast from the movie. I mean ME, someone from little Utica, NY. going to interview MOVIE STARS! And not for just any movie this is the best movie of the year. Marvel Comics, Super Heros, Action and Comedy all in one.Who could ask for more? The Avengers Age of Ultron opens May 1 in theaters everywhere.

What does one say when they are told they will be interviewing Captain America and Thor?  The Sexiest men alive according to People Magazine.  I felt like it could not be true. I kept thinking I was going to get an email saying JUST KIDDING. That did not happen. So here we were all anxiously awaiting the arrival of THOR and Captain America. 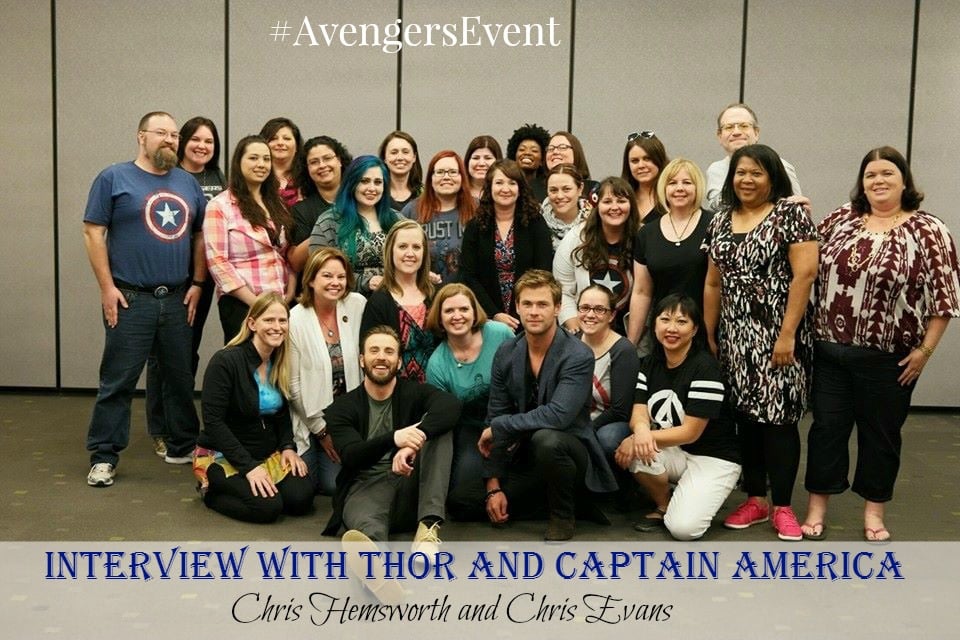 In walks Chris Hemsworth (Thor) and Chris Evans ( Captain America). Chris 1 and Chris 2 (As they called themselves), Yes I died a little.  Thankfully, they came in joking around like they were long-time friends. They really had a great relationship and made all of us feel comfortable to ask questions. This was going to be a great interview! 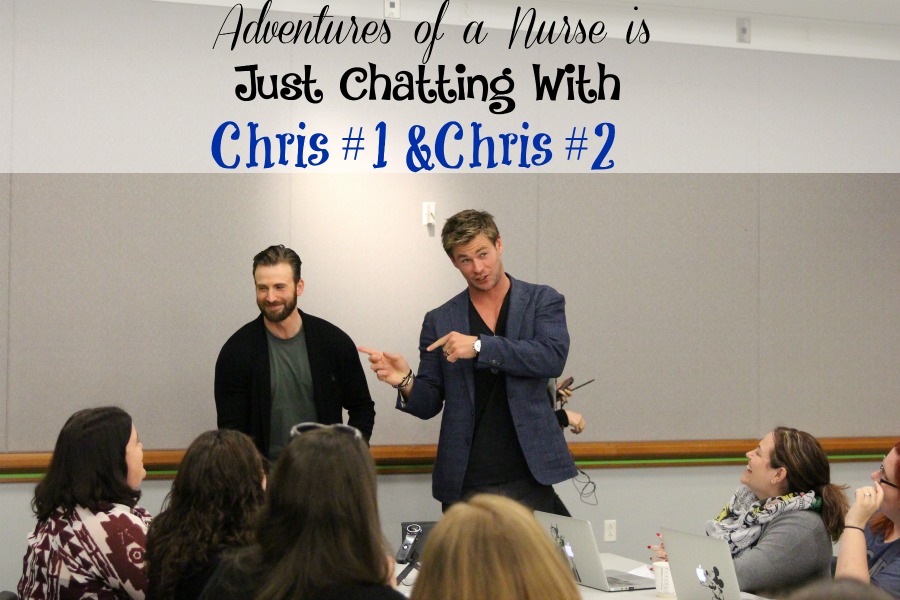 Q:    You guys find something that you discover about your characters each time you put on the costume? Or do you feel like you really know the character by now?

CHRIS EVANS   :    Well, you know the character but you hope there’s always new challenges. You hope as an actor there’s always a new you know, hurdle to jump in a new arch to kind of discover.  So, even though you kind of feel it. You know the first couple of movies you try to read as many comic books as possible to make sure the built-in audience, the fan base is going to be satisfied with what you bring to the screen.  But then in terms of where the character is going that’s up to the director and the writer and Joss . And that’s always new and that’s what makes these exciting to come back to.  If it weren’t new, it would get old, stagnant and the audience would feel it. 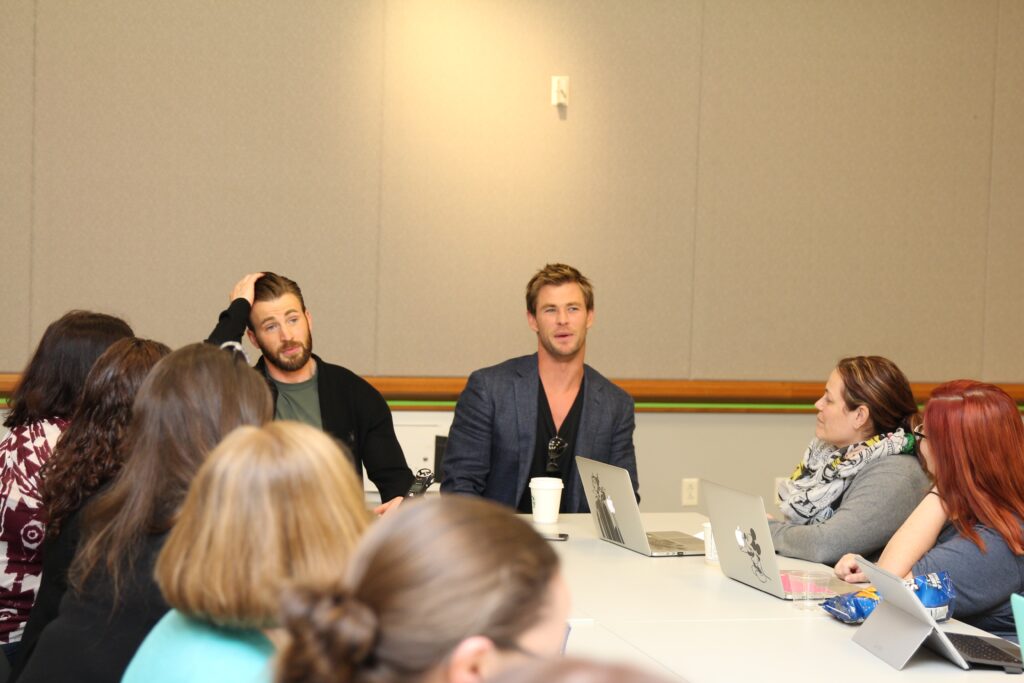 Q:What aspects of Capt. America’s personality are coming from you and what are the most difficult to portray?

CHRIS EVANS   :    I’m not sure –.  Well I think every character has to come a little bit from you.  I mean, the truth is you got to –, no matter who you play and one of the things I do as an actor is try to adjust who I’m speaking to.  You know, there’s always going to be whether you plan I mean –.  Obviously, if you’re not playing like some pedophile or something that like there’s always something.  I do believe there’s always something that you can tap into for every role because you have to make it your own.  You can’t be too foreign off base because you know, you have to make it something familiar.   I grew up with a kid named Charlie Morris and you can all right that down because he’ll love it.  And this kid, this was a kid who was an Eagle Scout.  You know what it takes to be an Eagle Scout as a kid? This is a kid who was 18 years old and was going on like his Eagle Scout like thing. He was just the best guy I knew, just a good guy.  And so a lot of times you kind of draw parallels to what Charlie would do but the trickiest thing is to try to make him likable. You know, he doesn’t joke, he’s not fun.  His not like sassy or loud or anything.  So you try to play this guy and not come across as boring you know, which is the most dangerous thing about the character.  So I mean, it’s fun because it’s not me. I’m a very open guy.  I wear my emotions right on my sleeve and this guy is a little more inside himself.  But that’s what makes it like a fun challenge and you know, like I said, you do draw on parts of yourself.  But I also lean on Charlie quite a bit, too, so. Charlie Morris.  He’s a good guy…..He’s just a good guy. He just does what’s right.

Q:    Do you think that’s changed you as a person at all?

CHRIS EVANS   :    Sure. I mean, there’s no denying.  Any actor will tell you if you have to live in any head space for an extended period of time it’s going to, you’re going to take some of it home with you.  Now it’s, you know, there’s no way to sound right saying this but you hope, you hope that some of the character comes home with you. You hope to see more of yourself, you hope to see more of Steve Rogers in who you are on a day-to-day basis.  So yeah, absolutely.

CHRIS HEMSWORTH    :    Unless you’re playing Hannibal Lecter.   You want to eat a person.

Q:  I was just going to ask if you had a favorite superhero growing up.

CHRIS EVANS   :   I mean when you’re a kid you kind of like what you’re given to play with.  So I had a Spiderman toy and so that was kind of my thing.  I never really watched Spiderman comics but he was my guy. He was battling ninja turtles a lot. 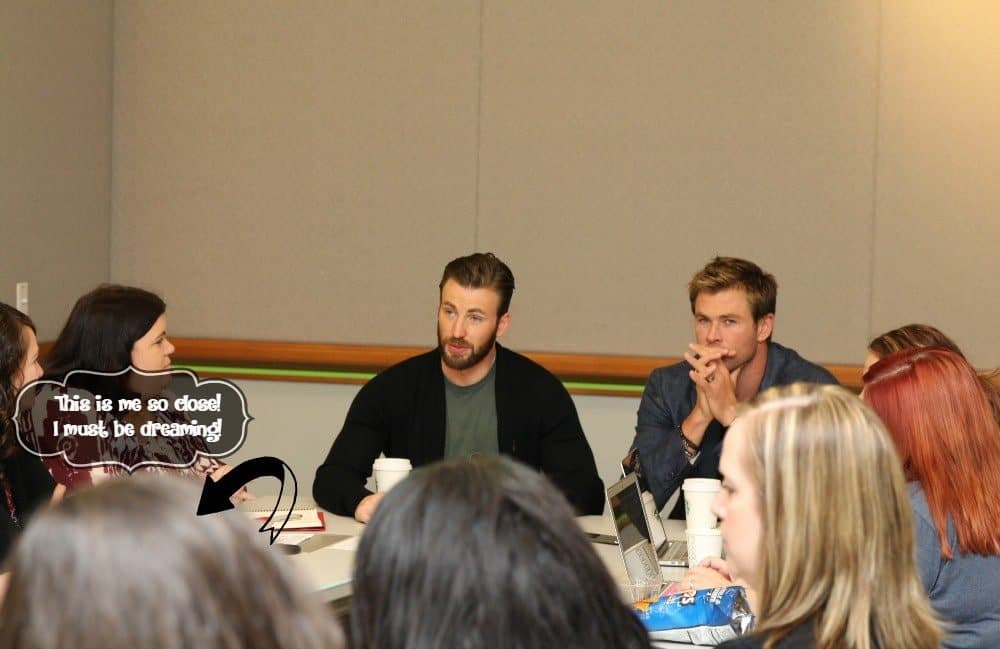 Q:    A little boy who is a victim of bullying.  He has a question for you. He wants to know if you think it’s okay for a boy to have long hair?

CHRIS HEMSWORTH    :    Of course it is.  God, yeah.  Absolutely. My dad had long hair for years. In fact, was asked to play for a football team, invited down to a big league in Australian football. It was quite a big opportunity. And the coach said, yeah, cool but you’ve got to cut your hair because he had a ponytail. And he said no and walked away. And gave up that dream and did something else, honestly.

CHRIS HEMSWORTH    :    And what was really kind of impressed me –.  And he, I think part of him sort of says, I should have just cut my hair.  But, you know, moral point and I think absolutely.  God, why not?  What is the issue there? And I think people who –, if anyone is narrow-minded enough to and limited in their thinking to think that is an issue or you know, then they’ve got the problem. And you wait, in a few years’ time that kid will understand that other kid has larger problems, you know?

CHRIS EVANS   :    Anytime I see a kid with long hair I’m like, that kid is so much cooler than anything I have ever was.   Girls love long hair so tell him that.   Yeah, there you go.

He’ll be fine. He’s going to clean up in a few years’ time.  And that bully who’s teasing him is going to get nothing.

Q:    How much fun was it to have the scene around Thor’s hammer?

CHRIS HEMSWORTH    : It was good to see us all in normal clothes and not you know, being superheroes. And for me personally you know, Thor can get so kind of stuck being the godly you know, prince or king or whatever he is.  And, I can’t keep up either.  You know, it’s nice to be in civilian clothes. And what do these guys do when they’re not saving the world?

You know, I think people –.  It’s relatable for people in the audience. And that was exciting to read and be a part of. 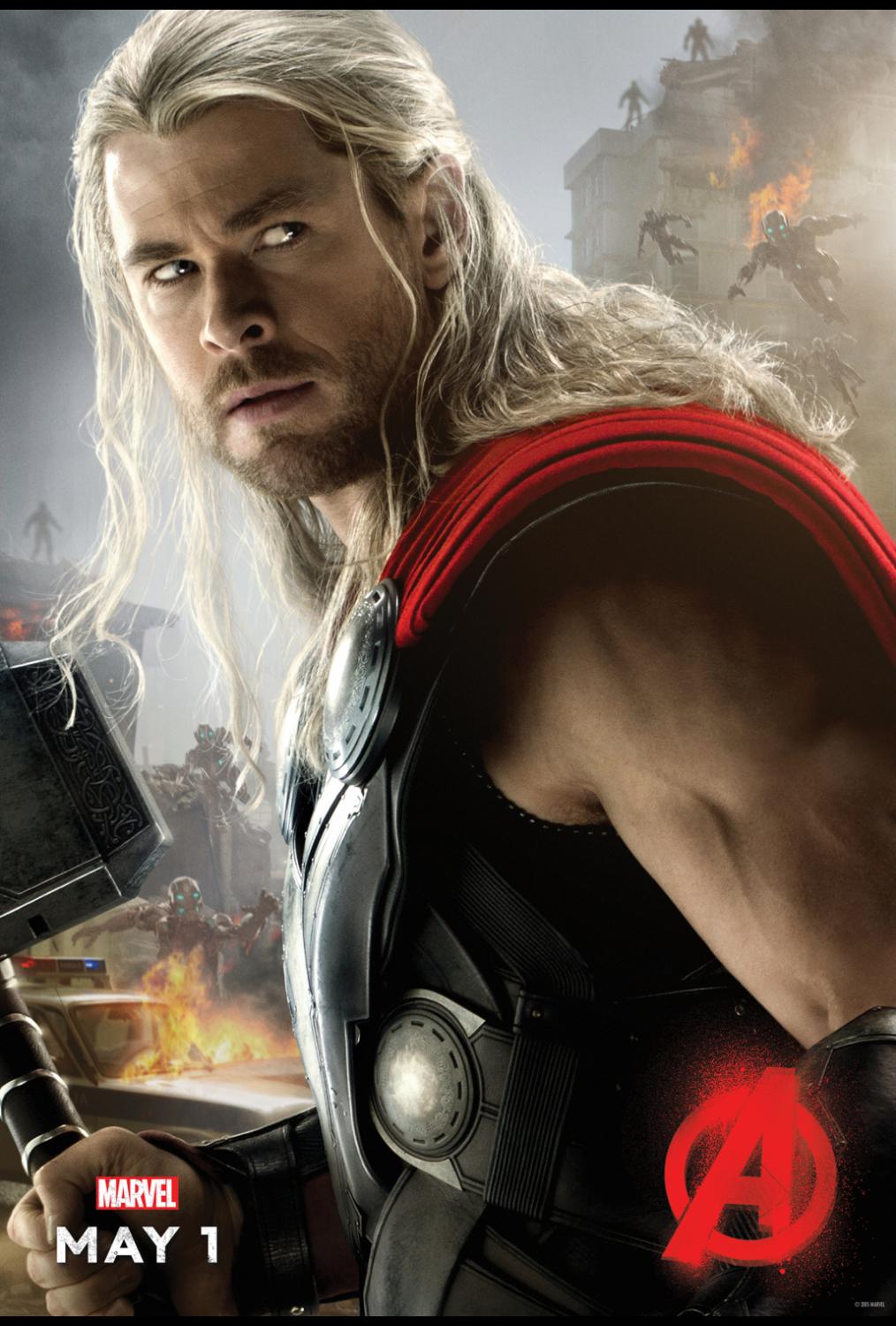 Q : Do you guys hang out after the movie?

CHRIS EVANS   :    I mean, truly sick of everybody.  No, absolutely. I mean, that’s one of the best parts of this job. I mean, any movie you’re going to get stuck doing a franchise with there’s a lot of variables that could go south whether or not the movie –.  I mean, the movies could just be lousy or you could hate the director or you could hate the cast.  Luckily, I don’t know how it happened but none of that has happened.  We got great movies, love the directors and the cast has become family. So absolutely. Outside of filming we all hang out, we all cause trouble.

CHRIS HEMSWORTH    :    I can’t tell you how many people when I was about to do avengers went, oh, good luck on that set.

CHRIS HEMSWORTH    :    The egos, yeah, especially him.  But about like the egos and the, aw, wouldn’t want to maintain that set.  I swear to God, like it, I didn’t see any of that and I still haven’t.  And I don’t know if no one wants to be the dick or the one who kind of you know,

CHRIS HEMSWORTH    :    But as Chris said, we got lucky and we do honestly have a great time.  You know?

>>And then it happened the best answer of the day!<<

Audio for GOD SPEAK QUESTION courtesy of Cookies and Cloggs

Q:   Do you ever kind of go into God-speak every so often?

CHRIS HEMSWORTH : Just when things need to get done. No. Just when the lights go off, yeah. Honey.
CHRIS EVANS : Best answer ever. There’s no answer that is going to be better than that one ever. I was going to make a horrible joke about like putting the cap back on the toothpaste. That is so much better. Oh man, I’m not Thor. There it is. That’s the best answer of the day.
CHRIS HEMSWORTH : Honey, let’s bring the thunder. Too far? Too far?

CHRIS HEMSWORTH : Let’s talk about this. 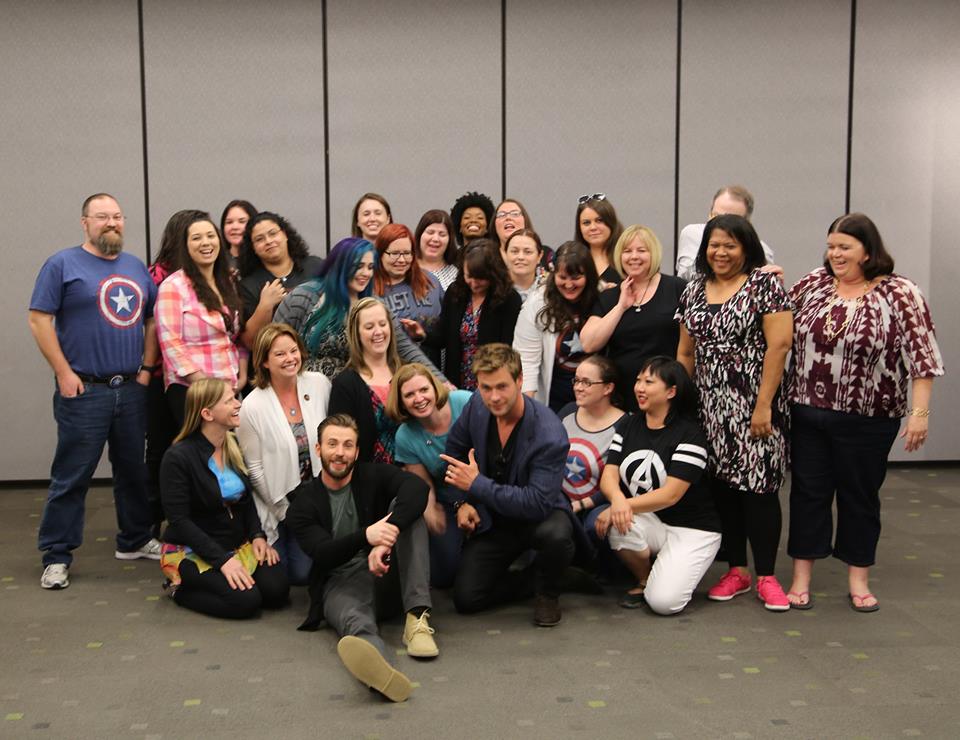 You can hear more about Captain America and Thor May 1 in The Avengers Age of Ultron opens everywhere MAY 1.

I hope everyone follows my full adventure #AvengersEvent. I still have more posts and my Review of Avengers Age of Ultron.

[…] the #AvengersEven. I actually meet Captian America and Thor!!!  You can read all about it Here. Well Now the new Marvel’s Captian America Civil War has got me all excited. I hope you enjoy […]

[…] When I was invited to LA for the #AvengersEvent I really did not know anything about the Avengers. My kids are both grown and I always thought this was a movie for kids. Boy, was I wrong. I immediately got started watching everything about the Avengers, Captain America,Thor, Iron Man, Hulk, and Agents of SHIELD. I quickly became obsessed with Marvel. I don’t know how I missed so many good movies. […]