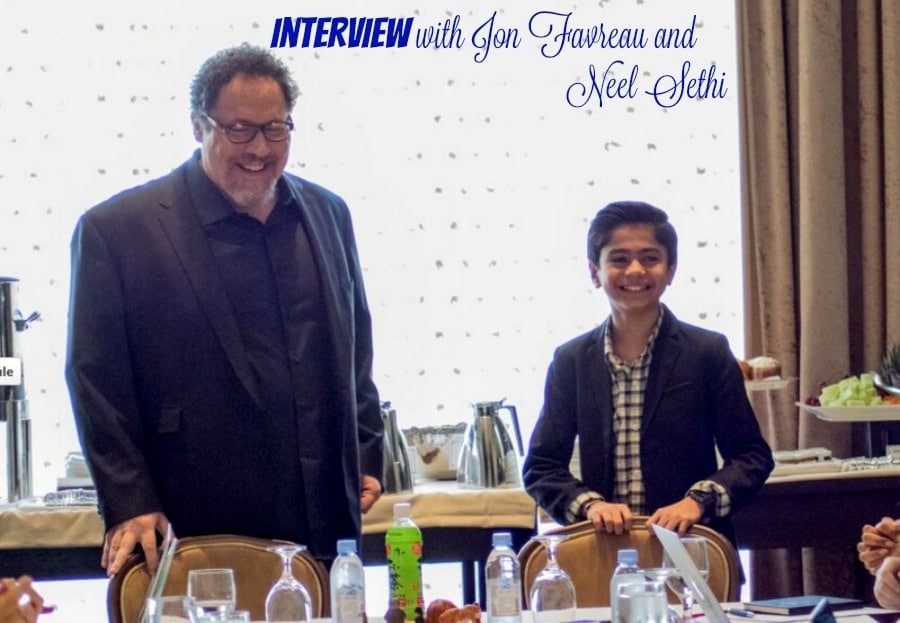 They entered the interview room with enthusiasm.  Jon and Neel had such amazing spirits. What a great joy to be able to interview them. 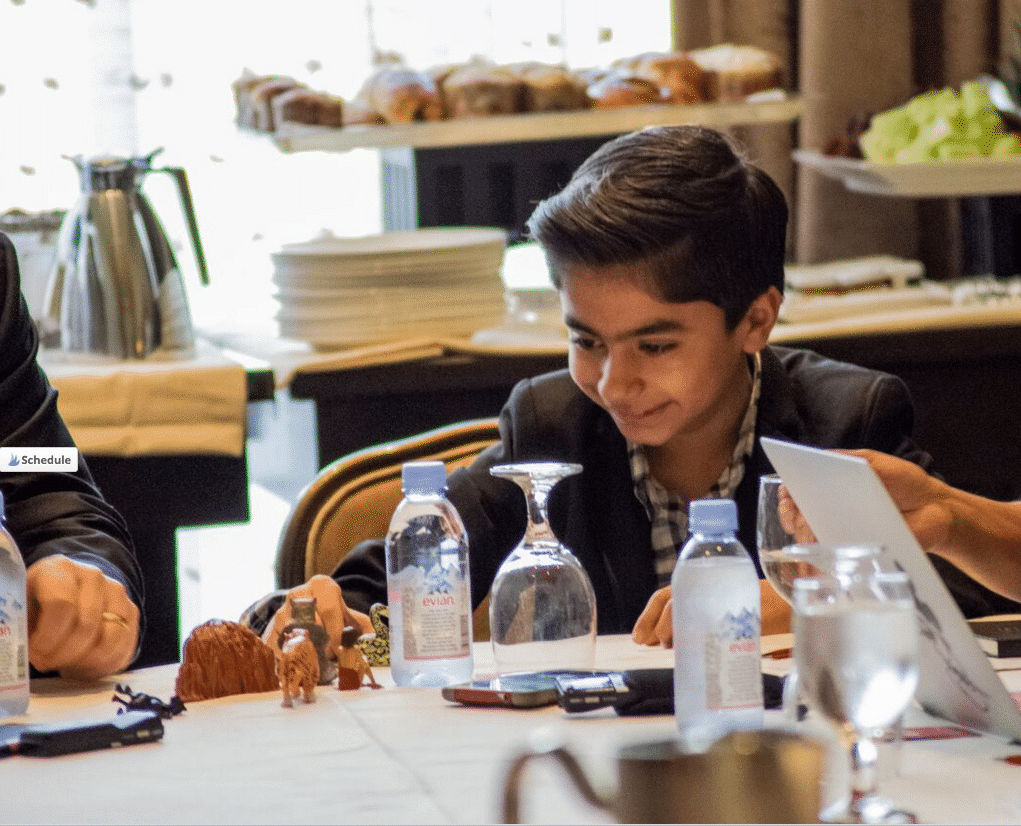 Neel: It’s amazing. Do you have it?

Jon   :   It’s a good thing I ordered 10 boxes of them. But he’s, um, yeah I brought two. And they’re, uh, he sings, he says a few lines in the Movie when he squeezes his paw and then he, and then if you hit it like 4 times, he’ll sing “Bare Necessities” and “Dance Around” so it’s awesome, it’s awesome, yeah. 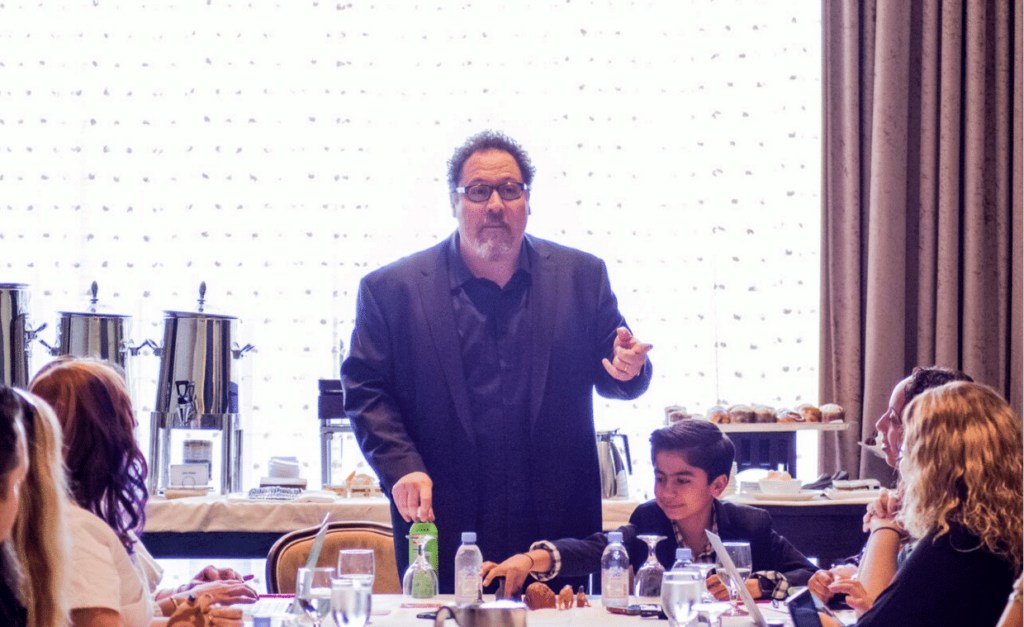 How did you know when you found Mowgli?

I can take credit for this, talented young man. He just, he wasn’t experienced but he had a quality and being a Father,  I recognized it, it was confidence. It was, he was, a full formed version of himself and so we kind of got who he was very quick, on the comeback, very confident, and I think the fact that he wasn’t a kid who was out there looking for Acting jobs took, made it fun for him. It didn’t feel like he was concerned about failing or concerned about getting the part or not. 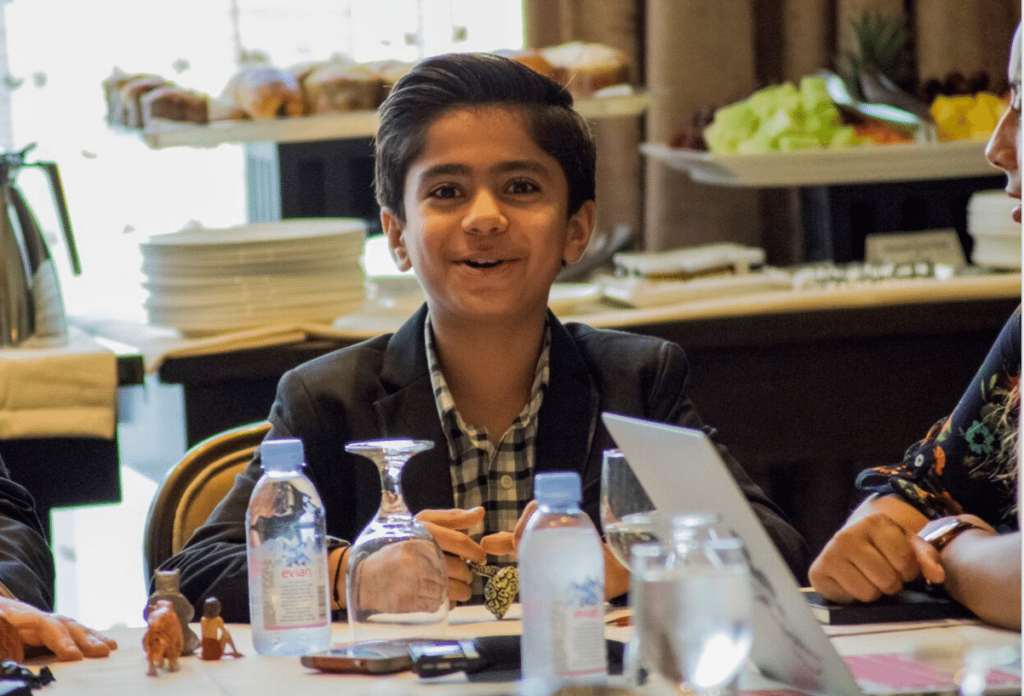 Q   : What it was like when you got the part so what was the audition part like and that?

Neel: Yeah, so I was in a Dance Class and the Teacher for the Dance Class said I’d be very good for it and I never thought about Acting before but I auditioned and they really liked me so we flew in LA, and then 2 weeks later, like we flew to LA and you’re in the Hotel, and the Producer called and were like flipping and jumping and we were so happy. We were so happy, we went out, and got my favorite food. 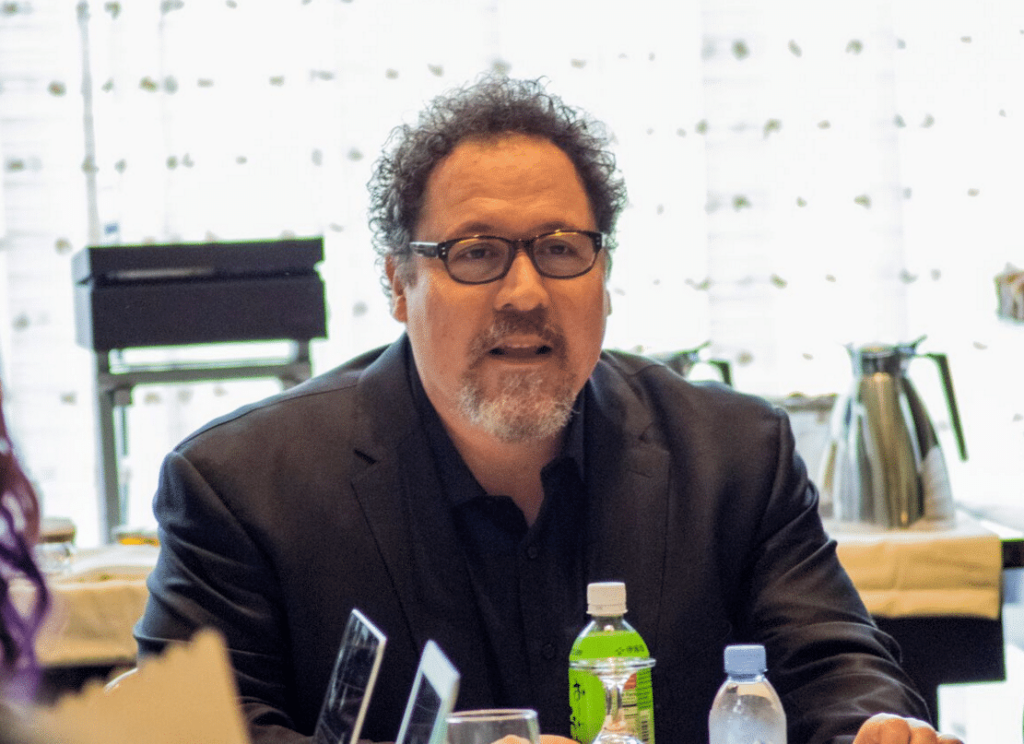 Jon   :   That was, um, some of it was intuition. A lot of it was trial and error, and honestly it was the part I was most concerned about as the plane is leaving the Runway now because if you don’t have the Music. I know when I see the– I know when I’m watching “Creed” and that Rocky comes on, I’m like yeah, you know. And um, and when the Music in Cinderella starts popping up. And so I remember as an Audience Member, I wanted. As a Film Maker, you’re scared, you’re like is it gonna break the tone but as a Film Maker, I’m like and as a Film Maker I know I got to give. If the Audience doesn’t– And as a matter of fact, there was one of the songs that wasn’t in the earlier version and my kids, and my wife, actually it was my wife who never, she’s very smart. She’s like it’s fine, everything is great. She’ll never, while I’m working on it, she won’t — she won’t get. You know, she — she’ll very supportive and — and um, is very, very rarely goes  against what I’m doing because she knows that I’m– You know, as a Film Maker, you’re facing a lot of different opinions and things, and when you go home, it’s nice to have support and enthusiasm and you know, confidence that you’ll figure it out and work it out.

But this is the one time, she was like you’re not gonna have that song in. And I’m like No, No, it might not fit tonally. And she’s like, I think you should have the song. And the kids were like, wanted to hear the song and so you want to– And so it was early enough in the process that we worked it in because I came on board, there was no Music in at all. And I started working on the Bare Necessities and then we worked in the one with Walken. But the trick of course is not to, if it’s a Musical, it breaks the — it breaks the tone and it was John Gaffney, the Orchestration of the Music helped tie it in to the entire piece.

A great thrill for me is to — is to show the kids and — and the whole family what we’ve been doing and then you get your first sense by looking in their eyes. And sometimes you show them versions that are almost done because you know their taste and — and I know it from the perspective of me. I’m 49. I have 3 kids that are different ages. Each one of them seeing how scary you could make it, see when they’re scared but they like it, see when they’re laughing. See the jokes that they get or don’t get. Uh, and what age is doing. Can you make one for the 9-year-old that doesn’t, that isn’t boring to the 14-year-old?

And then of course, you know, for — for my age as well. It’s a — it’s a really interesting, um, sampling and then now too, I’m really excited because tonight the Cast, a lot of the Cast haven’t seen it. Neil saw it for the first time.

Jon   :   And that was really cool for me to, you know. So right now is the fun part for me as all these choices that seem so precarious at times, how to work, balance the Music? How to balance the tone? How to balance the action and the humor and how to make that all work together. This is the part where it’s fun cause you see where you knew or you didn’t know. 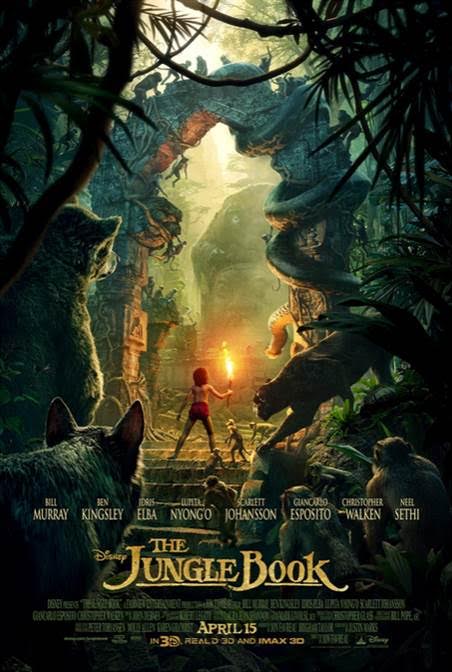 […] TODAY April 15th. On my press trip to LA for #JungleBookEvent I was able to interview the Producer Jon Favreau, Neel Sethi (Mowgli) and several of the cast from The Jungle Book. It has been one amazing […]

Interview with Lupita Nyong'o & Giancarlo Esposito - Adventures of a Nurse