SPOILER ALERT IF YOU DID NOT WATCH THIS MOVIE YET! 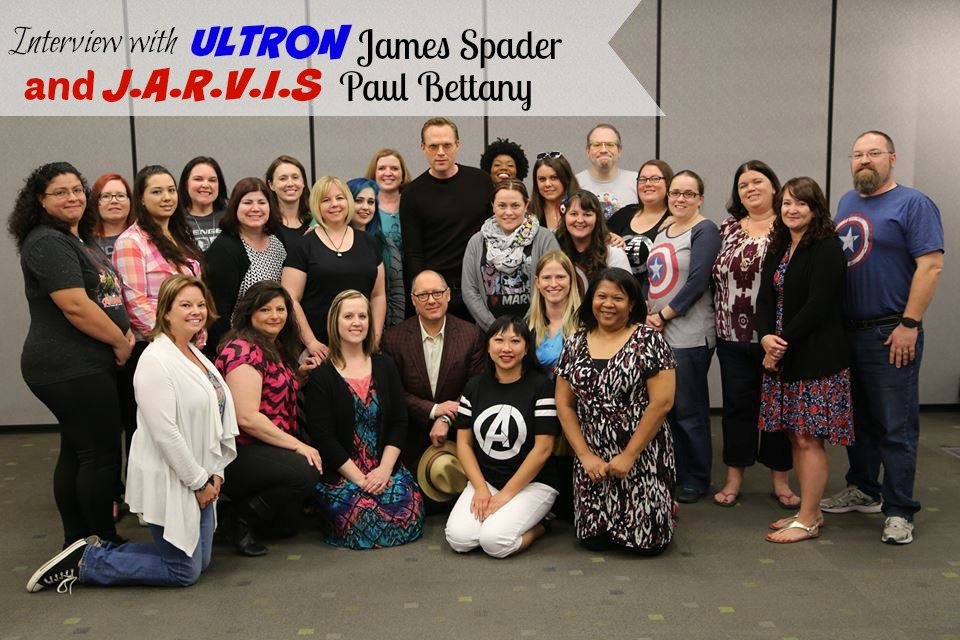 As a part of the #AvengersEvent on my trip to LA We were able to interview James Spader and Paul Bettany. I think I was the most excited about meeing them. I have always been a huge James Spader fan. I loved him in so many movies he always plays the Bad Guy you just love to Hate!  I was suprised at how nice all the actors and actresses actually were in person. This was my favorite interview. 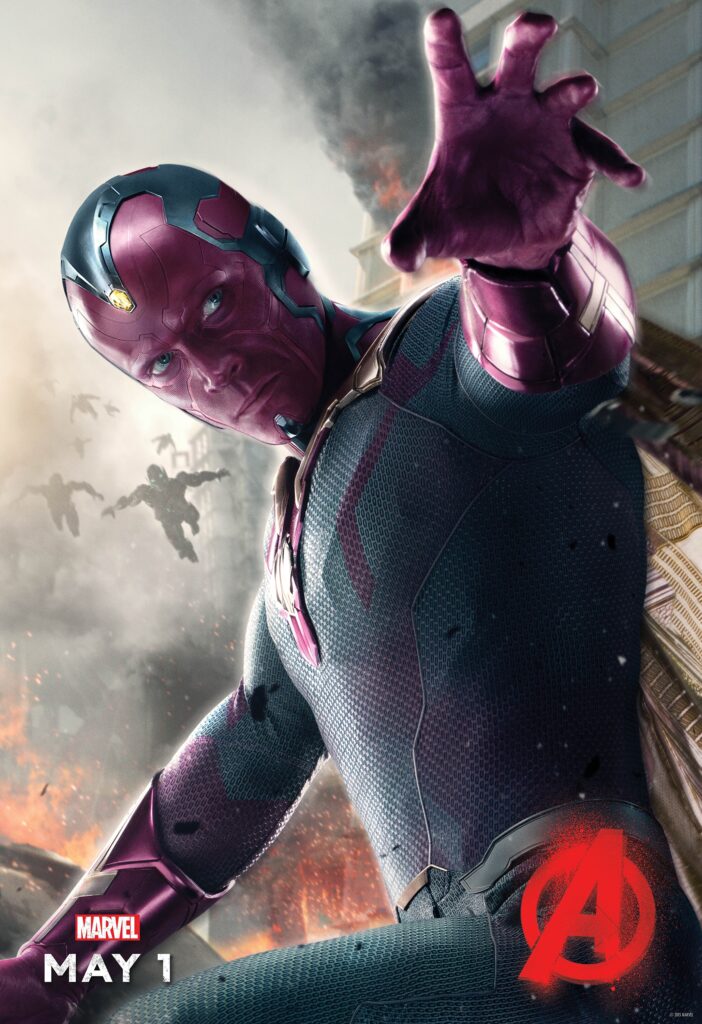 Q : I have a question for Paul. We always knew you as Jarvis. What was your reaction when you found out that you would be The Vision?

PAUL:     Well, it was sort of vindication really because I had done, I had just come out of a meeting with a producer who told me my career was over.  And this is a true story.  And I sat on the curb in Hollywood with my feet in the gutter and my phone went and I looked at it and went, “Hello?”  I didn’t recognize the number and it was Joss Whedon.  He said, “Do you want to play The Vision?”  And I went, “Um,” it’s so quick these days, “yeah, I kinda do.” 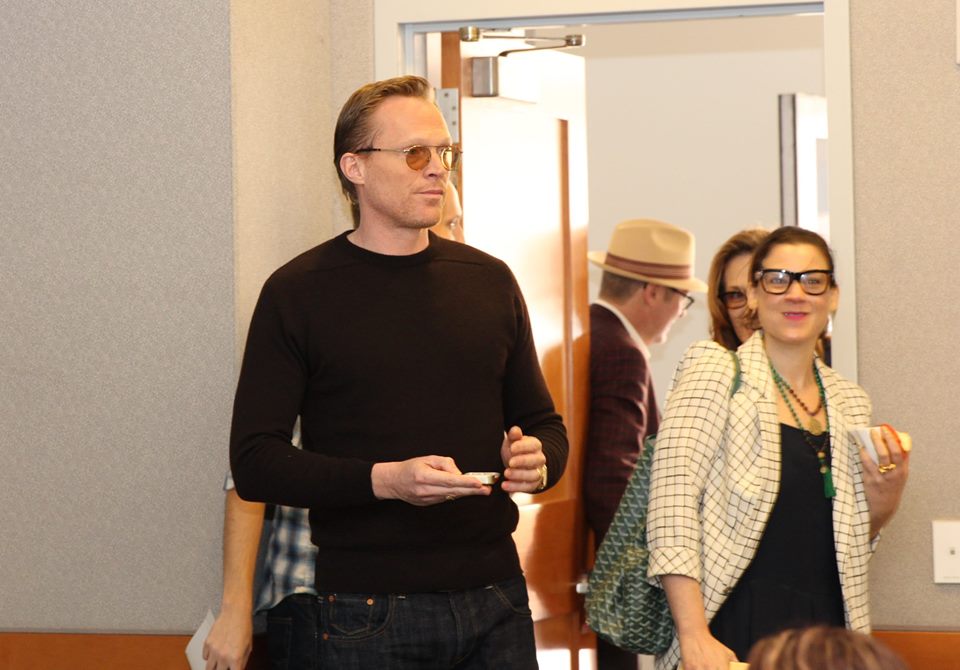 Q : How is it different for you on set? Like, I don’t, in the other movies where you’re playing Jarvis were you there interacting with the other actors?

I was brought in at the last moment to solve any clarity,  issues the film had which was my superhero power as Jarvis.  what was the difference?  The difference was I had to go to the gym.  I, had to stop eating carbs.  Um, I finally got to be on set with a bunch of really lovely, creative, talented people.  However, it also means that I have to show up at junkets now, you know?   The Lord giveth and the Lord taketh away

JAMES:    I did not have to cut back on carbs.  Somehow amazingly enough, those animators were able to slim me right down.

Q: James, did you have to be convinced to play Ultron? 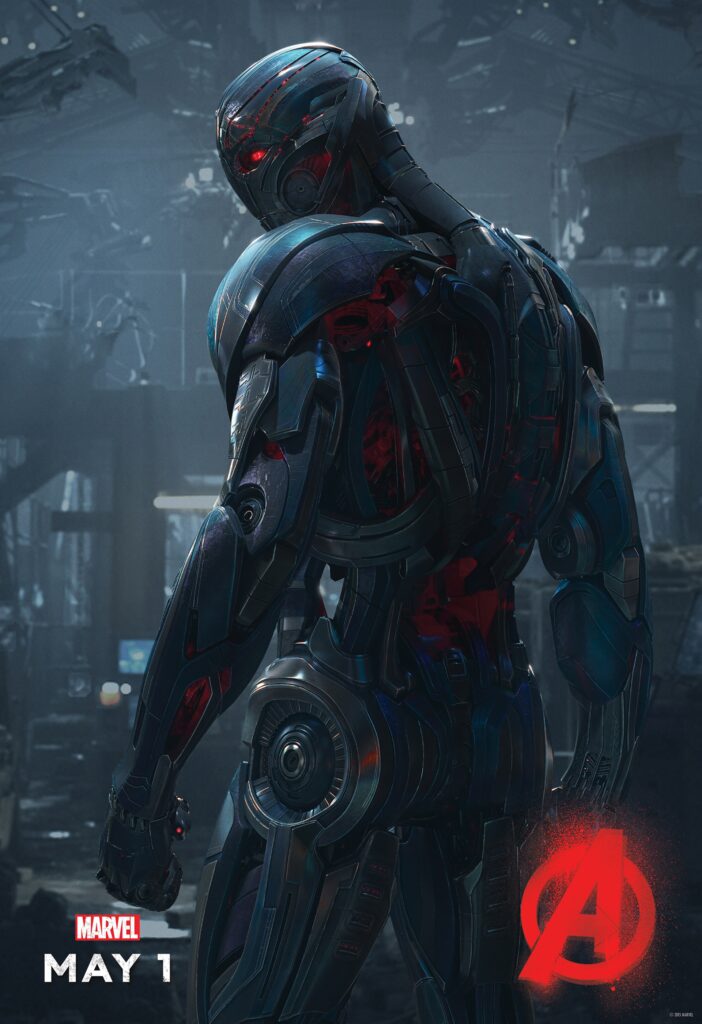 JAMES:    Uh, you know, I had met about, uh, two to three years prior to, uh, the telephone to me from Joss Whedon, uh, I had met with Kevin Feige and Jeremy Latcham.  Uh, my agent is also Sam Jackson’s agent.  And so she’s very in tune with what’s going on in the Marvel world.  And, I have three sons.

I have never in my entire career ever chosen a film to work on, uh, for the sake of my children.  And most of the films that I’ve done, um, they really shouldn’t, should- shouldn’t watch.  I remember I took my mother when she was in her eighties to go with me to Sundance to see this film I did called Secretary.

PAUL:     What a schoolboy error that was!

JAMES:    Both my mother and father have sat through some… they’re both passed away… but they both have sat, lovingly, they both have sat through, you know, just an array of perverted little movies that I’ve made.  But in any case I wanted, you know, my second son was really… and he was about seven.  He’s now 21 or 22.  I’m terrible at ages, but in any case he was about 18 at the time, something like that, 18 or 19.

JAMES:    And he had all, he loved comics and loved superhero movies and fantasy and, you know, all that stuff.  He just loved it.  And then, uh, by circumstance I also at the time I had a three-year-old son, again, and he was already sort of raiding his brother’s little figures and little things like that and was excited about it.  And I just thought, I just want to make a film for them, you know?  So I went in and I sat down with Kevin Feige and Jeremy Latcham and they had reached out to my agent and said, “You know, we’d love to sit down with James.”

JAMES:    And, you know, those sort of meetings are always just so brutal and fruitless.  And, and I had said, “Really?”  But, I mean, do they, and, and then my agent said, “Kevin doesn’t really meet with anybody unless there really is a genuine interest.  And, and I said, “Great.  Well then I’d love to talk to him.”  So I sat down with him and I said, “I just would love to do one of these things and just be such fun.”  And I told him the reasons why and I think he really responded to that ’cause that’s his fan base, you know?  And, uh, so we were sort of looking for, you know, the, he was looking for something and I was sort of thing.

JAMES:    And they said, “Well, funny you should mention that ’cause we’ve been trying to find the, the right thing.  And so the next thing was a phone call from Joss and, uh, and, you know, as soon as I spoke to him and he, he, he… I’m sorry.  I’ve never been able to answer anything in a short and precise…  But anyway he, you know, I said, “What the hell can I bring to, to an eight foot robot, you know?  I don’t…  That’s not my skill set.”

JAMES:    And they were really tailored for that.  And he was absolutely right.  It was all of that.  Just a weird mix of crazy, scary, funny, poetic, you know, just a weird guy. 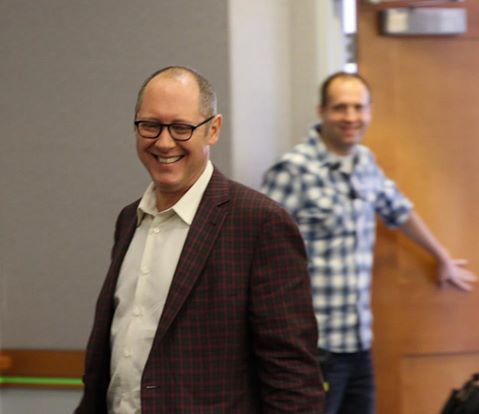 Q    :    I have a question for James.  You have always played the bad guy we love to hate in so many of your films.

Q    :    Bad buys you love to hate.  But with Ultron, is there any part of your humor in Ultron? Cause we definitely see your mannerisms.

PAUL:     And his world view, in fact.  Global devastation and James’…

JAMES:    I’m a great believer in chaos.  But no, yes.  I mean, I, part and parcel of, listen, in, in sort of, in, but I think that’s true in any film or television show or play or, I mean, anything you do.  I think that, you know, if the casting works, you’ve been cast because that person intuitively knows, that director intuitively knows that what they need, you’re going to be able to provide.  And he was specifically looking for that.

JAMES:    He was looking for that sense of humor.  And he was looking for that irreverence in marriage with the other aspects.  And, um, and so he took advantage of it and, and, you know, we would play with things and I’d make a suggestion, he’d, you know.  But I really was very faithful to what he was writing because he was really writing it so specifically to me.

PAUL:     And if you’re looking for a James Spader type there’s not many places to go, you know.  It’s, like, it’s, there’s a one-stop shop. 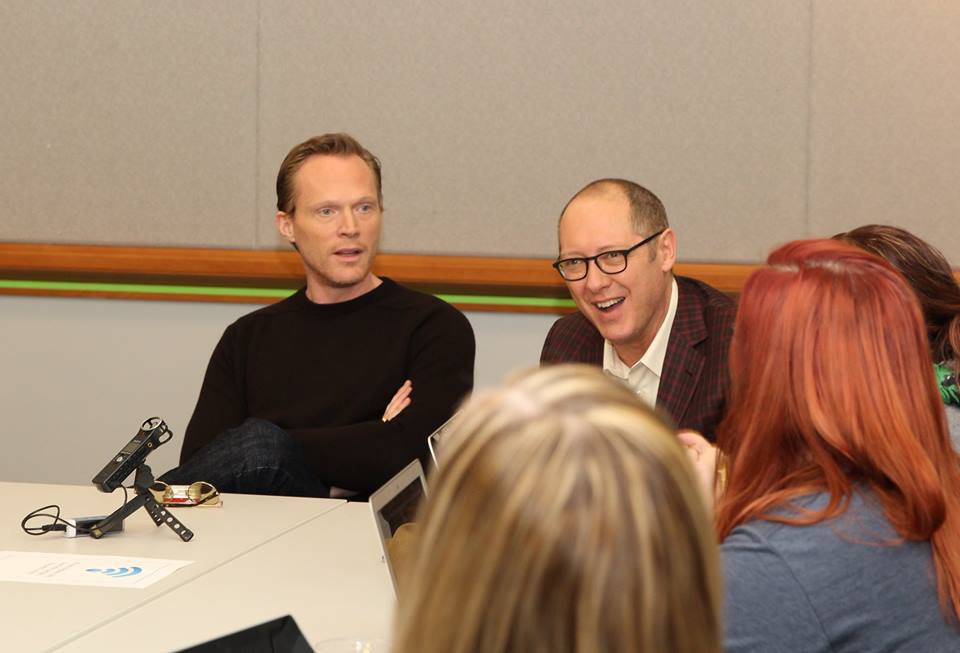 James Spader Discusses Preparing for the Character of ULTRON:

JAMES:    I was amazed that I saw, you know, with this magnificent body, you know, and made out of vibranium and all the rest of it, this sort of technological wonder.  To actually see my 55-year-old sort of very comfy, uh, physique, I, I, and to see all of my sort of gesture and posture and movements and expression and all of it was there.  And then my son did see the film a couple of days ago.

And I said, “But how about the face?”  And he says, “You know, I see you in the face.”  He said, “Amazingly enough, considering it doesn’t really have a nose.”  And he said, “I really saw your eyes and your expression and certainly move- head movements, everything.  I saw it all there.  So I was, it was worth it, I guess, to go through all of the arduous process of motion capture.  which is fascinating actually.  , do you mind if I tell you just very quickly?  Sorry Paul that, uh…

JAMES:    [LAUGHS] Uh, but I’ll tell you a very funny thing.  I’m just excited about it because somebody in a, in an interview just before this had asked specifically about this and, and, and I hadn’t thought about it until now.  But the very first day that I walked onto the studio lot, before I ever hit a set or anything, within a half hour, uh, I walked into a room and, uh, they had cameras set up around the room in different, the room was a big empty room and there were cameras set up around and there was a bunch of guys with a whole bunch of laptops a- and women and, and so on all sitting around.

JAMES:    And they put me in a fractal suit, uh, which is just a sort of, uh, you know, sort of two piece or, you know, looks like you’re gonna go for a run, and, but has shapes and colors and things and all over it.  And then they dotted up my face and they, uh, put a big rig on my back and a big headgear rig that had two sort of antenna that come down that are cameras that are right here with headlights right here, so I’m lit right here.

JAMES     And they had me go through a range of motions and, uh, fingers, everything, head turns and all the rest of it.  And then, uh, they put it into some program on the computer or something and, uh, I stood around for about ten, fifteen minutes and fifteen minutes later I was, also set up around the room were these monitors, and in fifteen minutes I could walk in my outfit into the center of the room and turn my head, move my fingers, go like this, and I could look at a monitor and see a sort of formative stage of Ultron doing everything I was doing.

JAMES:    So right from the very first moment I arrived there, I knew what sort of, I could start getting a sense of what sort of, you know, physicality would be appropriate for that eight foot robot.  And there was a guy there, quite small, who would’ve been proportionate to my height.  I’m five-ten.  He was very small.  He, he, sort of proportionate height to what, you know, not Chris Hemsworth but, you know, uh, maybe an average height avenger might be in proportion to me if I was eight feet tall.

JAMES:    And he was wearing a fractal suit, he was a stunt guy, he was wearing a fractal suit and all the gear as well, uh, and they made him do the range of motion and everything else and within 15 minutes he and I would go move around the room and he was as, you know, different character and, and so I was able to see right away an eight foot Ultron, me as, as an eight foot Ultron with another, you know, actor who’s a proportionate height to what, you know, an average size person would be.

JAMES:    It was really amazing.  Uh, so right from the very first moment I was already getting a sense of how to perform for this character. 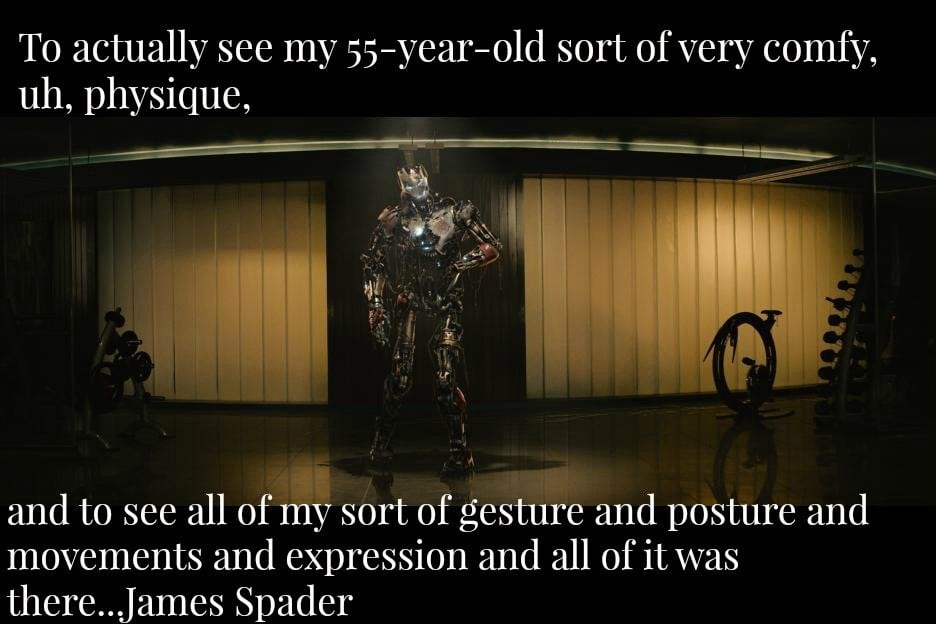 AVENGERS AGE OF ULTRON IS OPEN EVERYWHERE IN THEATERS!