Visit to Agents of Shield Interview with 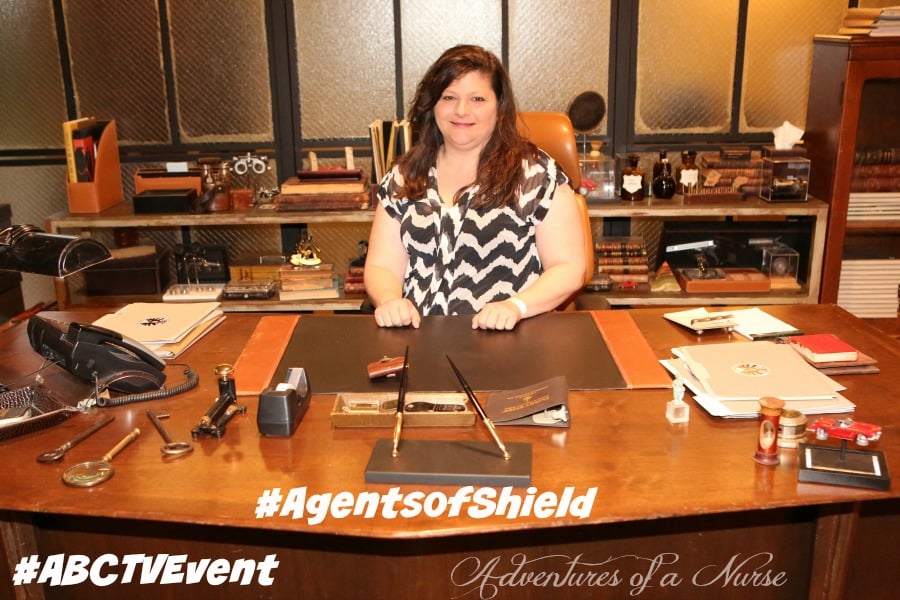 Yes, this is me sitting at Agent Coulson’s Desk as a part of our visit to the set of Agents of SHIELD.  I must say this trip was amazing. I was able to do and see so much. This is my last post in the series you can read more about all my adventures at the #ABCTVEvent #AgentsofSHIELD#AgengersEvent HERE. 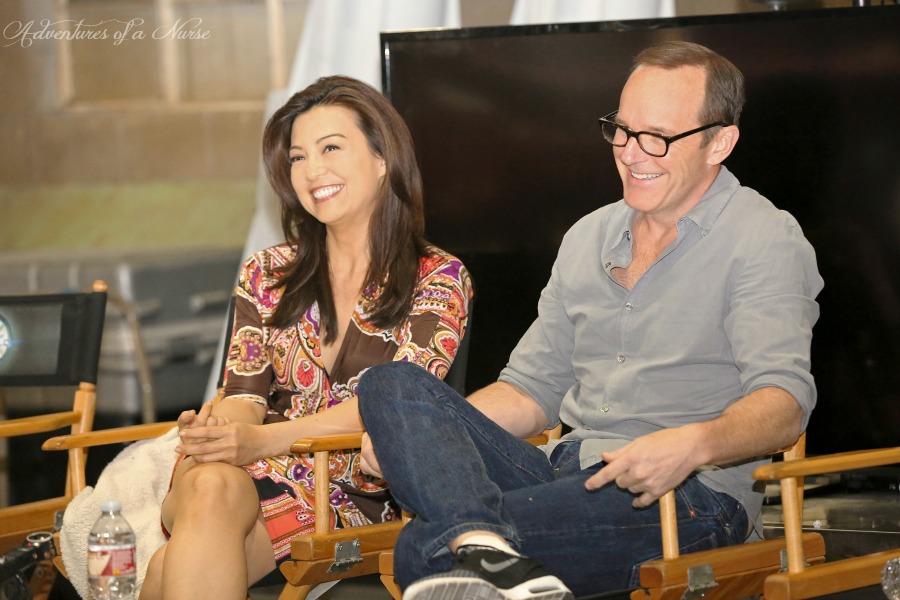 We were able to interview  Clark Gregg, Ming-Na Wen, Jed Whedon & Jeffrey Bell. When we first arrived Ming-Na Wen took our photo and posted it to twitter. That was pretty exciting.

Q   :   How much information did they give you in the very beginning?

Ming   :   They gave me the name of my character and that I was an agent of SHIELD [LAUGHS] and that, she left the field for a reason and that’s about it.  really I didn’t get very much. 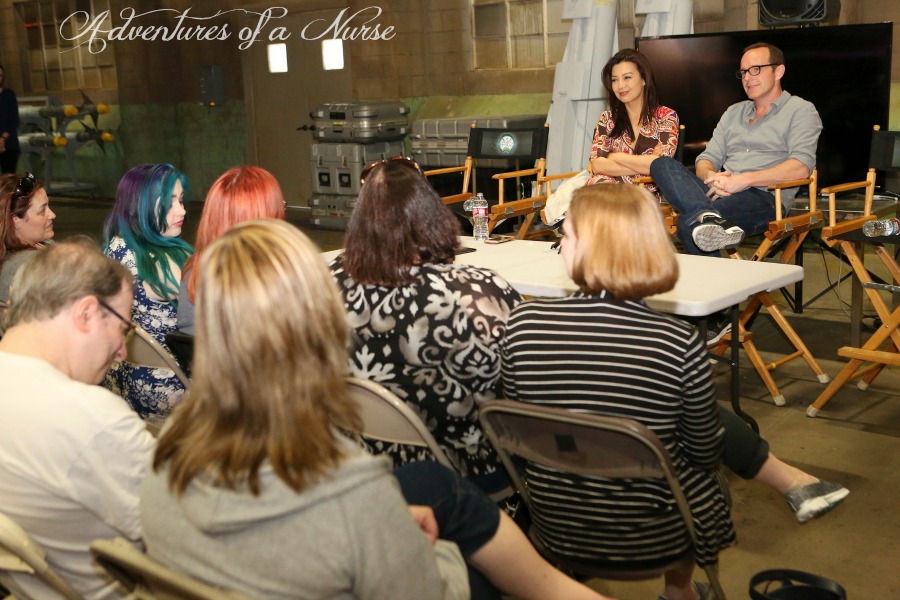 Q   :   What has been one of the most emotional scenes to shoot?

Clark   :   In Season 1, episode 11, um, I think it was– I– I get confused. I think it was called A Magical Place or Tahiti. And it was when, uh, Coulson was put in the memory machine by Raina. And, uh, the people we did not yet know were  Hydra and kind of forced to confront the fact that he had been dead that he’d been through this tremendously excruciating, uh, experience. And also that,  stuff about the cellist and kind of the things he had lost. And that– that part of the journey of someone who’d been a kind of no questions asked company man realizing that he too had been lied to by all kinds of people. Ming   :   Yeah. Well, you’ve lied to me a lot obviously.  yeah, I think for me it was, there was this episode about this kind of ghostly figure that,  May had to fight with. It really brought back her– her own personal issues about having to let go. So it had a reference to Bahrain, and I think that particular episode,  you know, she was struggling with,  various things  just not wanting to engage but having to– you know,  to take care of a situation and allow herself to, yeah, there’s a lot going on over there, isn’t there? 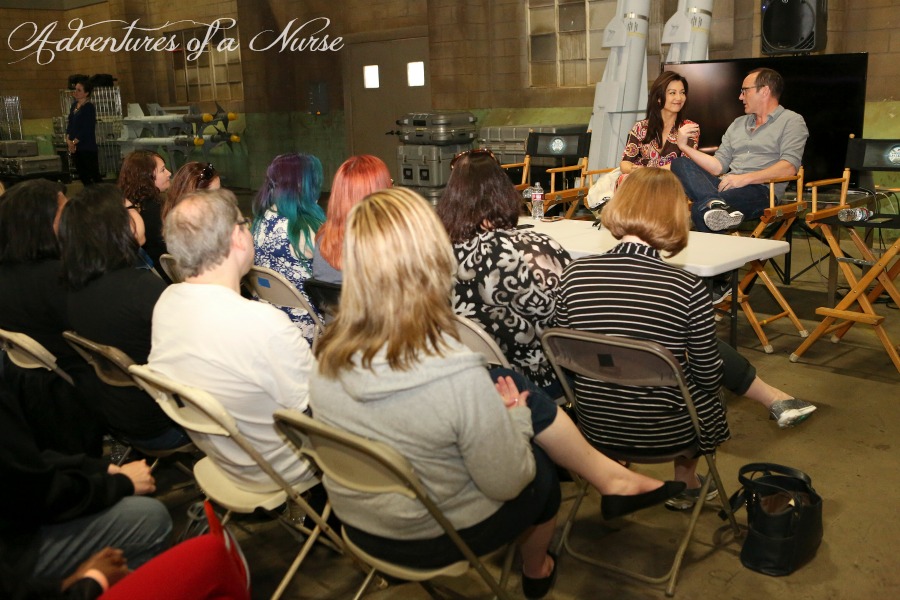 Q   :   How much of your own personality goes into your character? 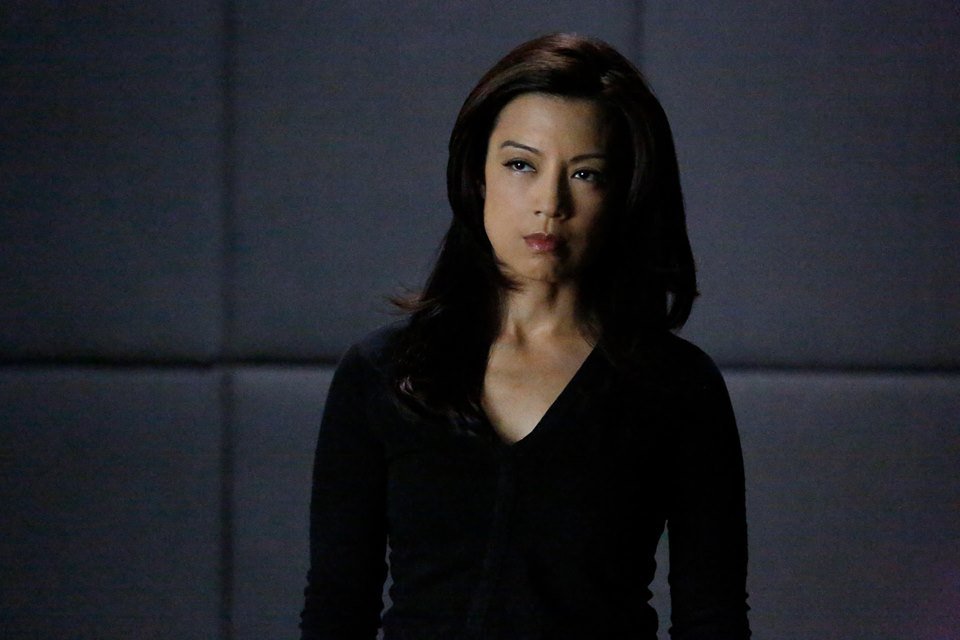 Clark   :   I’m always happy when those friends come to play. We’ve had, I’ve always felt that Coulson was kind of the crazy uncle of the Avengers. And he never likes to choose favorites. It’s all– it was very nice when,  in this episode last year, the 22nd episode when, director Fury showed up and handed me this spectacular cube, which does a lot of grooming things that no one even knows about. Um, when he showed up and made Coulson the director of SHIELD that was a big day. I love whenever, um, Maria Hill, Cobie Smulders comes to play. We’ve had Lady Sif a couple of times. Uh, Robert Downey and, uh, Jeremy Renner have been really cool online saying how much they wanted to come play. They’ve been a little busy doing this independent film that you guys saw the other night.   at some point I’d love to see all of that. I gotta say, for me, what was really exciting this year was people asking less that question and more, oh, Dear Lord, how is Fitz? How is his brain? Is he okay?     I really think a lot of this credit goes to the writers and some of these actors, the way people have really kind of been concerned about Skye and Chloe Bennett and fascinated by Mockingbird and this Mack and this SHIELD too. And having people like the magnificent Edward James Olmos show up. What we’re doing here is getting to bring new stuff, the inhumans into the world. And at some point,  I do think the flow will become a little more porous. But I’m glad we’ve gotten room to kind of set up our own thing. 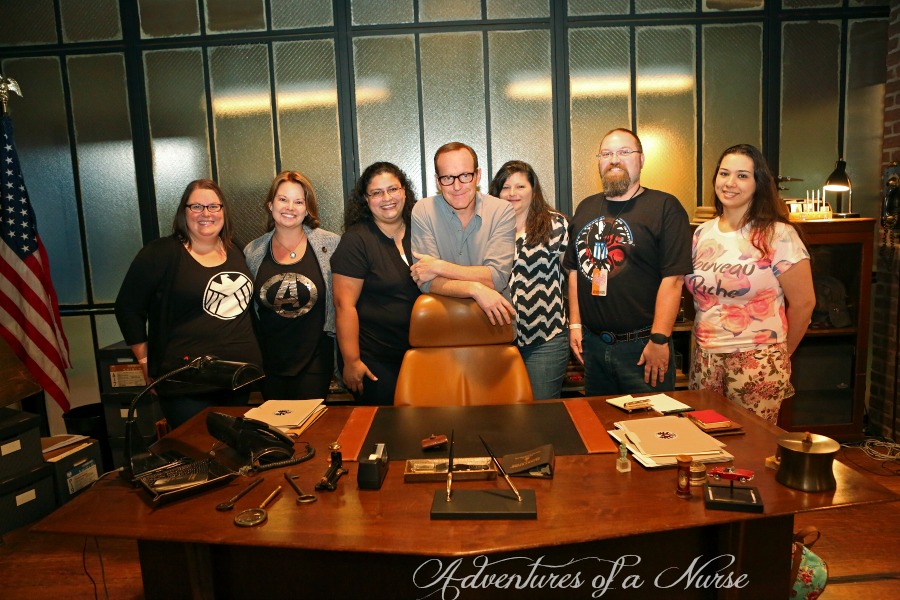 We were also able to speak with Jed Whedon & Jeffrey Bell 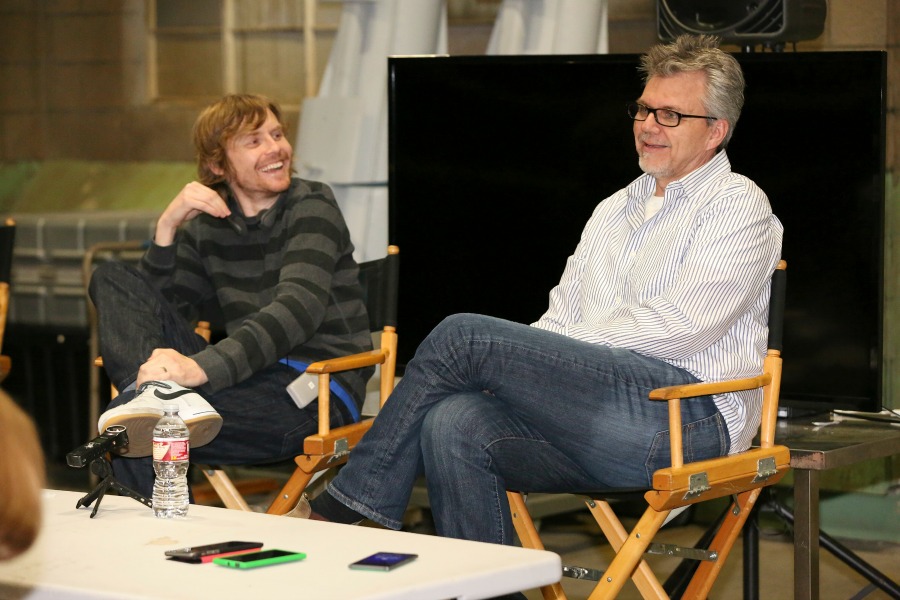 Q    :    We have the Marvel cinematic universe and the TV shows. Are you limited to what you can and can’t do?

JED  :    We definitely have free reign but it does limit us in that we can’t kill Captain America like we plan to each week. No, you know, obviously there’s guidelines. They have these huge temples and we sort of move between them and there are things that are off limit to us for sure because they have either big plans for them or have already shot stuff that’s gonna use them. But in terms, we don’t feel limited by it. It’s sort of a fun puzzle for us and, you know, we get big toys to play with because of it. So, you know, it’s sort of a privilege to live in that universe and the fact that when something happens on our show it is canned. It is exists and the fact that we have to be respectful to that is also, it also means that if we do something it is canned and so that aspect of it.

JEFF :    The only challenge really was when we first launched we knew that Hydra was the big bad guy in Capt. two and there was one word we were not allowed to say on Shield. We called it the H word and so we knew that was coming and we knew we were building to that and we knew we were gonna reward that way and we knew it was gonna blow apart the team but it might have been helpful to have said the H word earlier for big comic fans. They’re going who are these bad guys.

Make sure you tune in TONIGHT for the 2 hour finale of #AgentsofSHIELD.

S.H.I.E.L.D. puts everything on the line to survive a war that blurs the line between friend and foe. Coulson and his team will be forced to make shocking sacrifices that will leave their relationships and their world changed forever, on the two-hour season finale of “Marvel’s Agents of S.H.I.E.L.D,” TUESDAY, MAY 12 (9:00-11:00 p.m., ET) on the ABC Television Network.

A special THANKYOU to Holli for making the #AbcTVEvent so special and Thank you to Marshall for inviting me on the most amazing adventure (#AvengersEvent)of my life!