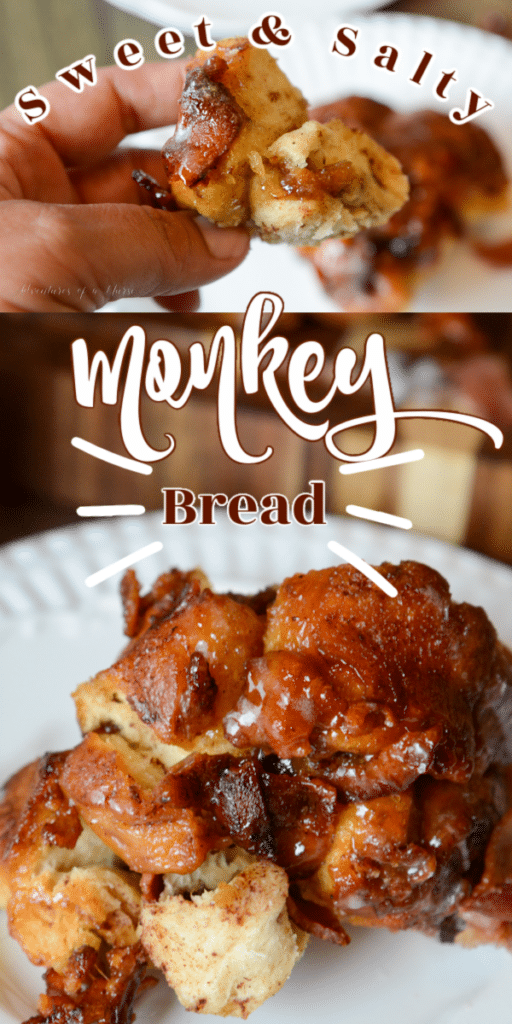 Monkey bread comes in all varieties these days. Basic refrigerated biscuits, cinnamon roll style, savory, and the list goes on. This cinnamon roll monkey bread recipe is one of my favorites.

I wanted to bring you a fun twist to a monkey bread recipe. Kid friendly and bacon lover approved.

Step 1: Start by preheating your oven as directed and spray cooking spray on your pan. Then work on fixing up your refrigerated cinnamon rolls into quarters.

You also want to cook up your bacon till crispy. Place the bacon on a paper towel to drain off excess juice. Chop bacon once cooled.

Step 2: Toss in your cinnamon rolls and bacon along with the maple syrup mixture. Sticky, sweet and a savory twist.

Step 3: Bake in the oven as directed until the monkey bread casserole is fully baked. Allow to cool a few minutes.

Flip the monkey bread onto a platter and serve up and incredibly flavorful breakfast that was a breeze. It will offer that golden brown color, sticky, and full of sugar and cinnamon flavor in every bite.

What Cinnamon Rolls To Use

I used Pillsbury cinnamon rolls you buy in the refrigerated section of the store. You are welcome to buy whatever brand of cinnamon bun rolls you prefer.

I love the size of these and they bake up nice and fluffy.  This is such an easy recipe with cinnamon rolls for a quick and easy breakfast.

This bacon maple monkey bread is versatile if you need to change up some ingredients in this recipe.

How to Remove Monkey Bread From Bundt Pan

Monkey bread is known for the gorgeous presentation. The process is rather simple but can be intimidating if you have not tried getting your breakfast bread out of the pan.

Allow your bacon monkey bread to cool for 5-10 minutes on a cooling rack once you pull out of oven.

Then place a platter or lid on top of the pan. Carefully while holding plate flip the monkey bread upside down.

The monkey cinnamon roll bread should come right out. If you need to fix a few pieces for display go ahead. Just don’t wait too long to flip or it will stick in pan.

If you are lucky enough to resist the urge to eat the entire bread, lucky you! But in all seriousness any leftovers can be placed in a sealed container.

Store in the fridge for up to 3 days. When you want some pull apart what you want and toss in the microwave for a quick reheat.

You get that fresh out of the oven taste and warmth.

Are you a fan of this bacon cinnamon roll monkey bread?

Are these the Grands cinnamon rolls, or the smaller variety? Thank you!

I loved this recipe so much.It's really awesome. Try this too https://www.beckandbulow.com/cheeseburger-recipe/